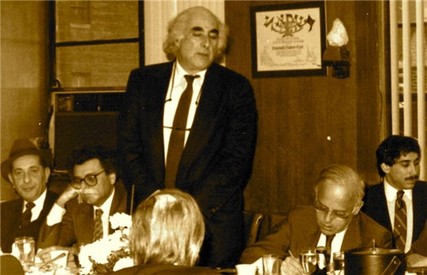 It was after World War II that the diamond industry took really took off in New York. In the wake of the devastation in Europe, many diamond dealers immigrated to the United States, thus expanding the DDC's membership rolls. Their influx into America, together with the unprecedented economic boom that took place in the country in the post-war period, shifted the balance of the diamond trade from Western Europe to New York. Indeed, immigration has long been a decisive factor in the growth of the U.S. diamond sector, and the DDC both then and today traditionally has served as a melting pot for a diverse group of nationalities and cultures.

Over the years the Diamond Dealers Club has changed dramatically to keep pace with expanding foreign markets and rapid technological advancements. It organized selling trips for members to Asia, installed highly sophisticated communications and security systems, and provided a vast array of services necessary for members of the industry to participate and compete in the contemporary world market.

In 1983, Eli Izhakoff, the Secretary of the Diamond Dealers Club and Chairman of its Building Committee, negotiated a lease for space at 580 Fifth Avenue. Shortly, thereafter, the Club moved its offices and trading platform to that address, where it has been located for nearly 30 years.

The DDC also was intensively involved in the representation and administration of the international diamond trade, being a founder member of the World Federation of Diamond Bourses when in was created in 1947. It hosted the WFDB’s biennial congresses in 1964, 1982 and 2004.

Members of the DDC know that they are protected by the Club’s stringent membership requirements, by-laws, and a proven system of arbitration, in which disagreements can be promptly resolved by a neutral dispute resolution mechanism whose decisions are upheld by the New York State Supreme Court.

Since its founding in 1931, the DDC has grown into the largest diamond trade organization in the United States and one of leading diamond exchanges in the world. And although none of the few pioneers who were among its founders are alive today, many of their descendants are still prominent in the trade and can be counted among the Club’s 2,000 members. They undoubtedly would have been proud at what has been achieved.