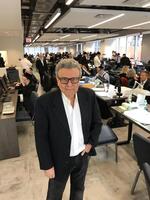 Eli Izhakoff is partner of J.Izhakoff & Sons, a diamond manufacturing and import/export firm, with offices in New York at 580 Fifth Avenue.

In 1979, he first joined the board of directors of the Diamond Dealers Club in New York, and in the years that followed held several senior positions, including chairman of the board and secretary.

He was elected to serve as treasurer-general of the World Federation of Diamond Bourses in 1986 and was appointed a member of its Executive Committee.

In January 1990, Mr. Izhakoff was elected president of the Diamond Dealers Club and immediately conceived and formed the Diamond Industry Steering Committee, an umbrella organization of the four diamond trade associations in New York and served as its first chairman.